Doublebooked: Her Point of View

By Her April 24, 2014 career Hers leadership Professionals 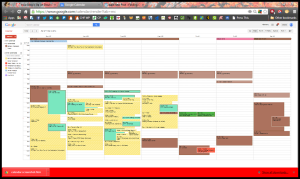 When D and I married 11½ years ago, we knew that we both wanted meaningful careers and both wanted to be fully engaged parents.  Still, we didn’t give much thought to how we would both do both until after our first child was born.  As we’ve been figuring out how to make things work for our growing family these last 5½ years, I’ve been asking social entrepreneurs and public policy leaders who’ve gone before me how they’ve done the work-family juggle.

Here’s what I learned.  Virtually all of the successful social entrepreneurs I’ve met were young and/or childless when they launched and grew their first ventures.  Among public policy leaders, nearly all of the men had a spouse who subordinated her professional activities to theirs.  A surprisingly large number of the (many fewer) women never had children.  The vast majority of those who did have kids either had a fast-track career first, children second or didn’t fully engage in careers until their children were grown.  Across the board, most of the leaders I spoke with were financially independent (or happily sharing a house with 10 roommates and living on macaroni) and/or had a partner willing and able to either generate the family income or shoulder the childcare burden.

The take-aways are deeply troubling.  As a professional, I worry that the lack of role models for a not-financially-independent, two-parent, two-career, more-than-two-person household is a canary in a coal mine.  I’m greatly disturbed by the norm today that being available 24/7/365 – which is completely dysfunctional for anyone who needs or wants to play a significant day-to-day role in family life – is necessary for high-level professional success.  I’ve worked in the public, private, and nonprofit sectors, in direct client service, behind the scenes, and in the highest levels of government.  I’ve experienced the rush and the feeling of importance that comes with being “needed” by work at midnight.  But I’ve also observed that the always-on modality is rarely necessary, much less effective.

As a parent, I can’t help but think about the lessons our behavior teaches our children – that public service leadership and daily family involvement aren’t really compatible.   As a partner, I worry about whether I’ll be able to find a way to keep pursuing my professional passions while also allowing my husband to pursue his.  As a person, I’m appalled by the narrow range of family experience among our policy leaders and social entrepreneurs.  Where are the leaders diverse enough to effectively solve the world’s problems?

I know my family isn’t the only one struggling to find a better way.  Policy changes could help: lengthy paid parental leave; a tax structure that doesn’t disadvantage a dual-income family; affordable childcare; school schedules that aren’t based on the needs of an agrarian society.  But these won’t come about without culture change.  Without families standing up, en masse, and saying “this isn’t working for us, for our neighbors, for our society.  This isn’t the future our children deserve.”

I challenge all of us in public service to set the example.  My husband and I are taking a small step by baring our experiences trying to do things differently, and what we’re learning along the way, in this blog.  But you don’t have to blog to stand up.  Simply draw your own boundaries, and stick to them.  Don’t segment your life.  Share your daily struggles with your friends, colleagues, mentees.  Ask for what you need at work and at home to make your life work for you.  Our future – and our children’s – depends on it.

A version of this blog post originally appeared on April 23, 2014 as part of the Religious Action Center’s blog series “Double Booked: A Conversation about Working Families in the 21st Century.” Double Booked deals with the many issues that affect working families, and features everything from personal stories to policy analysis. Visit the Double Booked portal to read more posts and subscribe for updates, or join the conversation on Twitter and Facebook with the hashtag #doublebooked.

8 thoughts on “Doublebooked: Her Point of View”

Your turn....What do you think? Cancel reply